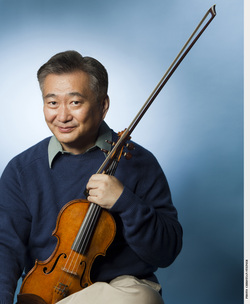 "Chin Kim has a vibrant, tangy, and rather "Russican" tone, with more than enough technique to master these pieces...the chromatics in the cadenza are nailed very nicely; trills are tight; pizzicatos as firm as gunshots...Kim's deep, into-the-strings tone in the opening reminded me of a very favorite recording, the old David Oeistrakh Soviet monaural recording..."

"Chin Kim is an experienced violinist from South Korea who has had the great part of his training in the United States. Such influences as Ivan Galamian, Dorothy Delay and Josef Gingold - add also, of course, his own inclinations - have turned him into an honorable practitioner of the strongly Romantic Eastern European style of violin-playing so prevalent in the first half of this century. The technique is strong, the pressure on the strings firm and heavy. Weight and dark color predominate."

"...had been struck by the sweetness of his tone and the charm of his personality...he played with great flair and brilliance, an easy, natural technique, no fuss, a lovely, expressive tone, and genuine feeling...he made the most of the opportunity for technical display, as well as of the lush romanticism, negotiating the trills and runs with great brilliance, and imbuing the singing lines with great expression...caught the dark somberness without losing the brilliance; the runs were crystal clear and perfectly controlled, and the slow movement had a floating sweetness..."

"Violinist Chin Kim plays with a gorgeous, lush tone...showed a genius for cool and languid deliberation in the second movement (of the Ravel Sonate) and a splendid bow arm as one might expect from a student of Ivan Galamian, in the perpetual motion finale."

"Chin Kim, with absolute concentration, unencumbered in his extraordinary sensitivity through transcendant technical control, brought to realization a perfect illustration of the composer's desire for the ascent of man to his God in the slow climb to the extreme high."

"Kim is a fine violinist, fully in command of his instrument and musically assertive...The Sonata...is a superior example of perceptive chamber music collaboration."

"The Korean-American Chin Kim, a violinist with impressive teacher (DeLay, Galamian, Gingold, etc.) and competition (Montreal, Brussels, Genoa, Indianapolis, etc.) credentials, makes a very strong impression with both the concerto and the sonata, performing each with consummate technical ease, attractive tone, and an excellent lyrical sense. His pianist displays the same appealing qualities and stylistic understanding in the Sonata, which has an especially exciting second-movement Scherzo..."

"...violinist Chin Kim was featured in the Mendelssohn Concerto in e minor...Kim held the audience silently captive during the cadenza of the allegro molto appassionato. In the andante, his sweet, sonorous sound vibrated with a sense of his knowing, understanding and feeling music on its deepest level. His fingers danced with fury and agility atop the strings in the allegro molto vivace. Kim played the concerto in partnership with the orchestra as if he were playing chamber music. He was always aware of the orchestra and communicated with very clear cues...Kim's meditative confidence and passionate playing never came off as being insincere or flashy for egotistical purposes. Chin Kim is a true musician and classy performer who serves the music before himself."

"...his firmer tone was complemented by a level of passionate commitment...with flair and a ferocious will to communicate...he gave an eerie dignity to which a full display of emotion was never alien...to adapt an expression usually reserved for the sense of sight, you couldn't take your ears off him."

"Kim's performance of the Finnish master's dark rhapsodic score...(was) Often appropriately rugged but rarely rough, Kim projected a firm tone, even in the long and technically harrowing passage of harmonics in the finale...intense, electric with nervous energy, emotional without becoming maudlin."

"From the beginning it was obvious that here was a fiddler with a natural knack for the instrument...possessed of an irrepressible spirit...the flashing brilliance of the last movement literally brought the audience to its feet."

"...relaxed performer, with a securely pitched tone and an easy technical style...the mixture of staccato and spiccato bowing and the impeccable double stops were especially impressive...highly polished sentiment and technical brilliance."

"Kim's mastery of his instrument is extraordinary...He identifies very closely with the music and delivers these familiar phrases with a convincing romantic flair...(with) gracefully lyrical phrasing...infectious warmth throughout."

"Chin Kim whose playing has been shaped by such a pedagogue as Ivan Galamian in the Curtis Institute and the Juilliard School, brought us some refreshing energy with his beautiful and singing playing."

"Chin Kim draws the audience close toward him (through) his playing. He plays with confidence and assurance...and when playing, his character (comes through) naturally and easily. His performance offers us pleasure, with grace and honey."

"The expressiveness of the performer intensified as the piece developed, and by the end, one had witnessed an astonishing demonstration of how a Korean instrumentalist can comprehend profoundly the subtleties of the Parisian salons. The audience awarded the artist a resounding success."

"The light comes from the East...He displayed a sort of Viennese grace, power, and the gentle strength of a cobweb in the Fantasy opus 47 of Schoenberg. And by what sorcery did this Korean rediscover the secrets of Jacques Thibaud so as to carry off the Scherzo-Valse of Saint Saëns-Ysaÿe with such dash, such sly grace, and such ironic charm?"

"The technique is brilliant, and the sonority penetrating; it could even appear piercing...It was a personal rendition, one of those rare occasions of risking a personal approach in the familiar Concerto of Tchaikovsky and in the work of Freedman."

"Violinist Chin Kim and the Long Bay Symphony played to a packed house Sunday night at the Myrtle Beach High School Auditorium for the final concert of its 1991-92 series...They were also granted the opportunity to meet the winner of the 1990 Paganini Competition, Chin Kim, violin virtuoso from South Korea. Performing the first violin concerto of Paganini, Kim virtually gave everyone a walking tour to the different and difficult ways you can play a violin. Did I say walking? I meant to say he was a trapeze artist who vaulted, somersaulted, and leapt from harmonic to harmonic on a tightrope no larger than his E-string. The second movement was eloquent, and the third was immensely humorous. With the able help of the orchestra, which keeps getting better and better, Chin Kim agilely navigated the audience through a rondo which, among other humorous elements, featured musical version of what the inner workings of a mechanical clock must sound like. Bill Shaffer's "chiming of the hour" on the trumpet will keep this reviewer chuckling for several years..."

"...out of its ranks came the stellar soloists in a thrilling rendition of Mozart's Sinfonia Concertante in E flat major for violin and viola. The "guest" artists were none other than the orchestra's own music director, world-class violist Jesse Levine, and the orchestra's concertmaster, Chin Kim, who ranks with the best. Norwalk is fortunate to have this brilliant violinist from Korea who has concertized in the major cities in the U.S. and abroad, under the most eminent conductors. He won the Nan Pa Prize as musician of the year, the highest honor given to a Korean musician by the government. Chin Kim captivates his listeners with his natural joie de vivre that enters right into the heart of his playing. His elan and Levine's spontaneity and depth blend into a marvelous musical conversation between the two instruments with the orchestra providing superb accompaniment..."

"Kim played the Wieniawski Concerto No. 1...the fireworks in the music were managed almost routinely...his tone and phrasing were controlled and well-placed and touched with a sense of freedom...something remarkable, a major achievement."

"Although the Tchaikovsky Concerto in D Major has been rather overplayed in the past, tonight's Tchaikovsky gave the impression that the concerto was freshly re-written-reborn. It was almost unbelievable how his rhythm(-ic sense) was as sharp as a well sharpened blade, with every nuance affecting the listener with sensations as strong as jolts of electricity..."

"...He focused so much emotional and physical intensity into the violin, that it seemed it would have to explode..."Move" doesn't adequately describe what they did in his unaccompanied performance of Paganini's 'Caprice No. 5.'...left the audience astonished and the entire string section smiling. This piece is all technique, and Chin showed beyond any doubt that he has that in abundance, too"

"The playing of soloist Chin Kim was well worth listening to (in) all 12 descriptive movements (Vivaldi's Four Seasons Concertos). His playing was powerful yet delicate, precise and expressive, subtly exploring the feelings and emotions as well as the pictorialisms of the music, giving the solo sections a sense of philosophical commentary."

Bernardville News, Madison, U. S. A.

"Chin Kim, with absolute concentration, unencumbered in his extraordinary sensitivity through transcendant technical control, brought to realization a perfect illustration of the composer's desire for the ascent of man to his God in the slow climb to the extreme high."

"A superb Korean violinist and 80 fine-tuned members of the Billings Symphony Orchestra joined forces on the Alberta Bair Theater stage for a rousing season opener Saturday night. Chin Kim played one of the best known songs of the violinist's repertoire - the showy Paganini "Concerto for Violin and Orchestra." His precision and passion were graceful partners in the skillful execution of this work...Chin Kim's Paganini had the audience's complete attention and was truly a workout for both soloist and conductor...the audience rewarded soloist, conductor and supporting players with a pre-intermission standing ovation. It should be noted that Kim performed the piece confidently - with its famous double-stops - as if running through a pre-concert warm-up. Only when an artist of talent has also worked hard can he achieve such ease, and it was a pleasure to watch him work..."